Planning India Tour ? Click Here
Jaipur
Govind Dev Ji temple is one of the prime tourist attractions in Jaipur. Read through the article to know about the temple and its legend.
Jaipur » Temples » Govind Dev Ji Temple 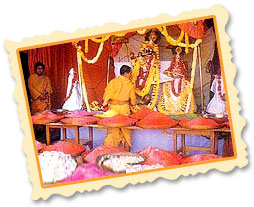 The temple of Govind Dev Ji is one of the most sacred and famous tourist destinations in India. It is located in the City Palace complex, in Jaipur, Rajasthan. The deity, Govind Dev Ji, is none other than Lord Shri Krishna himself. It is believed that the image in this temple looks exactly how Lord Krishna looked during his incarnation on earth. The idol was originally kept in the temple of Vrindavan in Uttar Pradesh and was later brought to Jaipur by Raja Sawai Jai Singh, a staunch devotee of Lord Krishna. The idol of Govind Dev Ji is strikingly beautiful for its complete resemblance with Lord Krishna, and the temple is placed between Chandra Mahal and Badal Mahal in the City Palace complex. Every day, various 'Aartis' and 'Prasad' or 'Bhogs' are offered at the temple, at seven different times. The festival of Janmashtami is among the most important ones celebrated here as it commemorates the birth of Lord Krishna.

History
The idol of Lord Govind Dev Ji was brought by Maharaja Sawai Jai Singh II from Vrindavan to his own palace, Surya Mahal. The king was inspired by a dream, in which Lord Krishna told him to install the idol in his palace, to save it from being destroyed by the Mughal Emperor Aurangzeb. Later, he built his new palace, Chandra Mahal, which became his residence.

Layout Of The Temple
The Govind Dev Ji temple is a part of the City Palace, which was the seat of the Maharaja of Jaipur. The temple is surrounded by beautiful gardens and inside it, one can see some beautiful European chandeliers and paintings in Indian art. The ceiling of the temple is decked with gold. The position of the temple allowed a direct view of it to the Maharaja from his Chandra Mahal palace.

Best Time To Visit
The best time to visit the Govind Dev Ji temple is during Janmashtami, a festival which celebrates the birth of Lord Krishna. Devotees can start visiting the temple from 5:00 AM, when the first "Aarti" starts. The temple remains open till 9:00 PM.

The temple of Lord Govind Dev Ji is dedicated to Lord Krishna and boasts of the royal past of Jaipur city. The temple is an extraordinary representation of the architecture of Jaipur as seen during the reign of the Maharaja Sawai Jai Singh II, the founder of the city. It is a very important spiritual and religious destination for Hindus, especially the devotees of Lord Krishna.