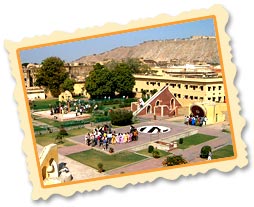 Jaipur- one of the best planned cities of India lies in the semi-desert lands of Rajasthan. The city reflects royalty; its structure resembles that of Rajputs. This city of Rajasthan has a lot of tourist attractions which attract 'n' number of travellers from India and abroad. Jaipur has lately developed as a business centre; shopping zones have come up like Johari Bazar, Chaura Rasta, Kishanpole Bazar, also known as Char Diwari area. This is the place that has the largest housing colony of Asia, Mansarovar. Sanganer in Jaipur is famous for handmade paper and hand-block painting. The best time to visit this Pink City to bask in its heritage is between October and March when the heat of the sun is less severe and the weather comparatively cooler. It, therefore, also becomes the best season to stop over to the nearby Ranthambore and Sariska Tiger Reserves.

Situated at an altitude of 431 metres above the sea level, the climate of Jaipur is of extreme type. Jaipur offers warm climate generally. The summers are from Mid-March to June and attain the maximum temperature of around 45 oC. The monsoon showers persist from July till September, but the city doesn't receive much rain. Winters in Jaipur witness a bright sun and pleasant climate each day. The temperature drops down to 5 oC at night. Early mornings and evenings are dominated by fog during winter season. Visit this wonderful place during these months and be all set to have a lovely vacation beating the heat. Winters have a strange spell on Jaipur which makes it a great place to visit. The weather then is pleasant enough to take a trip round the city of Rajputs. But in case you are the one who avoids the rush of people, drop in the city during April. Not many people see this place in the month of April as it gets a bit hot by then. During monsoons, the flights usually get delayed, landslides are common. So it's better to avoid this season too.

This magnificent city with a royal touch to it invites huge crowd, as it is the city of colours, fairs and fests. Some of the prominent ones are the Elephant festival, Teej festival, Kite festival, Gangaur festival, Camel festival. One should try and visit this land during the months of October to March, as the temperature varies between 22oC and 5oC at that time. This pleasant weather ensures that you witness the royal Pink City, Jaipur with complete delight, and facilitates you with a refreshing and enriching experience.