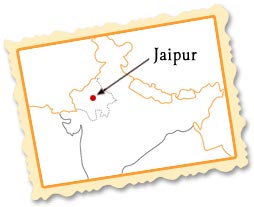 Jaipur, the capital city of the Indian state of Rajasthan is situated in the eastern border of Thar Desert, a semi-arid land. This state is one of the biggest of the country which shares the international boundary with Pakistan on the western side. Jaipur is popularly known as the pink city and is one of the well-planned cities in India, apparently, also the first. It is positioned at an altitude of 1417 feet above the sea level. On three sides, the city is enclosed by the Aravali hills and this is why, it is safeguarded from the rough desert. In the north, it is surrounded by Sikar and Mahendragarh district; in the south by Tonk; in the east by Alwar, Dausa and Sawai Madhopur; and in the west by Nagaur and Ajmer district.

The total length of Jaipur extending from east to west is about 180 km whereas the width from north to south is about 110 km. The main rivers passing through the Jaipur are Banganga and Sabi. About 28.65 million cubic meter ground water resources are available in Jaipur. To provide the drinking water to the old city, there is Ramgarh dam on the River Ban Ganga. The main minerals of the city are copper, iron, dolomite, white marble, glass and silicon. Sambhar Lake, which is the only natural lake with salty water is also the leading source of good quality of salt in the state as well as country, is very close to Jaipur.

The city is well-known among pre-modern cities for the width and evenness of the streets which are divided into six sectors separated by broad streets of 34 m (111 ft.) wide. These sectors are called as urban quarters which are further segmented by the network of interconnecting streets. Around the east, west and south sides of a central Palace quarter, five quarters enfold with a sixth one right away to the east. This Palace quarter surrounds a sprawling palace complex i.e. Hawa Mahal, formal gardens, and a small lake. The Aravali hill in the northwest end of the Jaipur is crowned by the Nahargarh Fort which was once the home of the King Sawai Jai Singh II. From the location of Jaipur, one is able to reach the other main cities of the country through the various means of transport. One can easily reach Delhi, Agra and other nearby cities through the network of roads, air and rail.