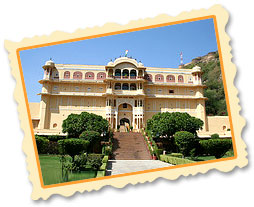 Samode is a large town, located in the Shekhawati region, in the royal city of Jaipur, Rajasthan. An ideal desert getaway, Samode is located on the way to Shekhawati and is known for the Samode 'haveli' (palace), garden and fort. This district is located close to the picturesque Aravalli hills. One of the popular tourist spots in this town is the Samode Palace. Tucked away in a corner of this town, the Samode 'Haveli', built almost 400 years ago, is surrounded by a sprawling expanse of hills. The fort of Sheogarh is also another popular tourist hotspot in the Samode district. Against the arid backdrop of the Rajasthani desert, there is a Samode garden that once served as a recreational ground for royalty. This town is a beautiful oasis set amidst the uneven expanse of a tawny desert. Samode is located 42km away from Jaipur and can be approached by air, rail and road, via the Pink City.

History
The district of Samode was founded by Maharaja Jai Singh and belonged to the royalty. The prominence of this town grew with the various rulers of the Kachawaha dynasty, and its responsibility was then entrusted to the British during the Raj. Samode Palace was built in the 16th century and was meant to be a Rajput fort. But in the 19th century, the fort was redesigned to look like an amalgam of Muslim and Rajput architectural styles. Rawal Sheo Singh was delegated the responsibility of expanding the fort and the palace, and eventually built the Samode garden for recreational purposes.

The Highlights Of The Place

Samode Garden
The Samode Garden was built in the 16th century, and is spread over 20 acres. There are rows of fountains, flower beds, pavilions and Victorian style dťcor here to admire. This is a popular tourist destination and the highlights of this place are the sandbag colored tents, Mughal terracing and the Victorian styled furnishings. Truly, a fusion of the best!

By Air
The Jaipur Sanganer Airport is the nearest airport to Samode, and is located about 40 km from the town. Regular tourist buses are the most convenient way of reaching Samode from here.

By Rail
Jaipur Central station is the nearest railhead that links Samode with other parts of the country. Cabs and buses available here can take you to your destination in no time.

By Road
The distance from Jaipur to Samode is 42. Jaipur is well-connected to the NH-8 and can be reached from Bikaner and Chomu, which is, in turn, inter-connected to Samode.

Best Time To Visit
The best time to visit Samode is from October-March.

Samode is a large town in Rajasthan which is renowned for the Samode Haveli, Garden and Palace. Since the climate here is arid and the plains are desert-like, the best way to explore the town would probably be on the back of a camel, with the breathtaking views of the country side and the remnants of a royal era in the backdrop.