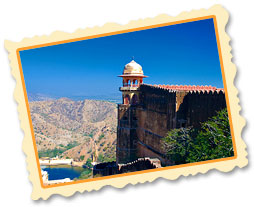 The Jaigarh Fort is a majestic stronghold built by Sawan Jai Singh II. This almost-intact fort is surrounded by huge battlements and is connected to the Amer Fort (also called 'Amber' Fort), with subterranean passages. Originally built to protect the Amer Fort and the palace within the complex, the Jaigarh Fort is architecturally similar to the Amer Fort, and offers a panoramic view of the city of Jaipur. The fort houses the world's largest cannon on wheels, a majestic palace complex and the assembly hall of the warriors known as 'Shubhat Niwas' along with a museum and an armory. Apart from the intricate architecture of the fort, the fort was also renowned for a huge treasure that was believed to be buried under the fort. It is now said that the government of Rajasthan seized the treasure when it was discovered in the 1970s. The Jaigarh Fort was built to secure Jaipur City and the Amer fort from warlords and rivals.

History Of The Fort
Architecture
The fort is built with thick walls of red sandstone and is spread over a vast range of 3 kilometers in length, with a width of one kilometer. The fort houses the world's greatest cannon on wheels known as the 'Jaivana Cannon' and a huge palace complex. This includes the Laxmi Vilas, Lalit Mandir, Aram Mandir and the Vilas Mandir. The fort has a well-tended garden which can be viewed by tourists even today along with an armory and a museum.

Important Battles
The Jaigarh fort was never conquered in battle, and was also the strongest of the three forts in Jaipur. During the Mughal dynasty, the fort bore witness to an ambush by Aurangzeb who defeated and killed his own brother who was the overseer of the cannon outpost in the fort. Apart from that, the fort never witnessed any major resistance, and only test-fired the world's largest cannon, once!

Nearby Tourist Attractions
The Jaigarh Fort is a palatial structure perched on the 'Cheel ka teela' hills, much like a jewel on a crown. Designed by a talented architect called Vidhyadhar, the fort is a regal reminder of the city's affluent history and is named after Jai Singh II, the ruler who got it built.