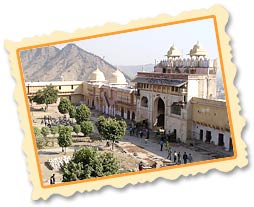 The Indian state of Rajasthan is famous for its royal heritage. Formed by the union of many princely states ruled mainly by Rajputs, Rajasthan has many forts and palaces. Some of these palaces and forts are associated with important historical events as well. Nahargarh Fort, along with other two forts viz., Amer Fort and Jaigarh Fort, once formed a strong defense for Jaipur city. Built by Maharaja Sawai Jai Singh II in 1734, this fort was originally named Sudarshangarh Fort. Later, it was given a new name, Nahargarh which means 'abode of tigers'. Located in one of the oldest mountain ranges of the world, the Aravalli Hills, this fort gives you a breathtaking view of the scenic surroundings. One of the major tourist attractions of Jaipur, Nahargarh Fort is noted for its extended wall which connects it to the Jaigarh Fort.

History Of The Fort
Nahargarh Fort was built in 1734 by Maharaja Sawai Jai Singh II, founder of Jaipur, on the Aravalli hills, as a retreat place. Nahargarh Fort is connected to the Jaigarh Fort through its fortifications. It is believed that the construction of this fort was obstructed by the spirit of a Rathore prince, Nahar Singh Bhomia. However, the spirit was pacified when a temple dedicated to him was built inside the fort. Sawai Ram Singh renovated this fort in 1868.

Architectural Layout Of The Fort
The fort follows Indo-European architecture and there are many structures inside the fort. To the left of the entrance gate 'Tadigate', there is a temple dedicated to the deity of Jaipur rulers. Apart from this, there is another temple inside the fort, dedicated to the Rathore prince, Nahar Singh Bhomia. Another attraction in the fort is the 'Madhavendra Bhawan' built by Sawai Madho Singh. This is a two-storey building which has suites for the king and his twelve queens. It is divided into nine similar apartments and each of these apartments has a lobby, bedrooms, toilets, kitchen and store. Other structures inside the palace include Diwan-I-Aam, an open air enclosure where the king met the common men and listened to their problems and complaints.

Important Battles
Nahargarh Fort was never attacked but, it witnessed some major historical events, like the treaties with the Maratha forces which attacked Jaipur in the 18th century. This fort gave shelter to many Europeans in this region, including the British Resident's wife, during the Sepoy Mutiny of 1857.

Nearby Tourist Attractions
Located 2.7km away from the fort, Jantar Mantar is one of the five astronomical observatories in western central India. Other places worth visiting nearby are the City Palace, Hawa Mahal, Jalmahal, Jaigarh Fort and Amer Fort. Located in a scenic backdrop of the Aravalli Hills, Nahargarh Fort offers a breathtaking view of the hilly milieu. The wonderful trek from the foot of the hill to the top, where the fort is located, is truly a great experience.