Planning India Tour ? Click Here
Jaipur
Tonk is famous for its pre-historic mosques and palaces. Very popular among tourists, this town was ruled by the 'Pathans' from Afghanisthan. Read further to learn more about this well-known town.
Jaipur » Excursions » Tonk 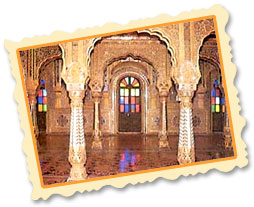 A small town near the city of Jaipur, Tonk is one of the most interesting places in Rajasthan and is renowned for its old 'havelis' and mosques. This elegant town of Jaipur was once ruled by the 'Pathans' of Afghanisthan. The ancient town takes pride in its beautiful architectural wonders, established during the Mughal era. The Nawab of Tonk was very fond of literature and built a large library of Persian and Arabic manuscripts. Founded in the 17th century, the town of Tonk serves as a host to several mansions, mosques and British colonial buildings. This cross-cultural town is a mixture of Rajput buildings and Muslim architecture, which sets this town apart from others. Rich in cultural heritage and magnificent structures, Tonk attracts tourists from all over the world. It is famous for its fabulous hall called, the Sunehri Kothi. Also located in this town is the Arabic and Persian Research Institute.

History
According to historical data, the King of Jaipur, Raja Man Singh conquered Tari and Tokra Janpad, during the Akbar regime. 12 villages of Tokra Janpad were given away to Bhola Brahmin in the year 1643. Later, the name 'Tonk' was given to these twelve villages by Bhola. Connected to the Bairath culture and civilization, Tonk has a rich historical backdrop. The modern town of Tonk was founded by Nawab Amir Khan.

The Highlights Of The Place
Sunehri Kothi, declared as a historical monument, is also known as the Golden Mansion or the Mansion of Gold and is the main centre of attraction at Tonk. Although the exteriors of this Golden bungalow are ordinary, the interiors are greatly ornamented by mirrors, gilt, stucco and stained glass. The Arabian and Persian Research Institute houses rare collections of Arabic and Persian books, some of them beautifully adorned in gold, emerald, pearls and rubies. The Jama Masjid, one of the biggest mosques in India, is also another attraction in Tonk. It is structured in the Delhi Mogul style of architecture.

By Air: Jaipur Sanganer Airport is the nearest airport and is well connected to all the major cities of the country. From the airport, one can avail cab or bus services to reach this town.

By Rail: Tonk, being a very small town, isn't well connected to the rest of the country. The nearest major railway station is Banasthali-Newai, about 35 km away, from where passenger trains can be boarded to reach the Bhanwar Tonk Railway Station.

By Road: Tonk is well-connected by roads. Rajasthan Tourism provides regular bus services that run through major tourist cities and nearby towns.

A historical town of archaeological significance, Tonk is an absolute delight for any tourist who visits this town. The 'Lucknow of Rajasthan' which was once ruled by the Pathan tribes from Afghanisthan, is rich in ancient culture and architecture. One can spend their holidays in this unforgettable town and explore the town's ancient buildings.