Planning India Tour ? Click Here
Jaipur
Sambhar is known as the lake town and is also famous for wildlife sanctuary. Know best time to visit Sambhar and how to reach there.
Jaipur » Excursions » Sambhar 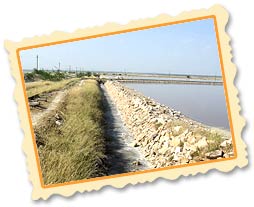 Sambhar, situated in the Indian state of Rajasthan, is a municipality of Jaipur and is also popularly known as the Salt Lake City. Civilization here goes back a long way, and houses the Sambhar Lake National Park, Sambhar Lake Tiger Reserve and is also home to the largest saline lake in India. Excursions to the Sambhar city and the wildlife sanctuary from Jaipur are pretty frequent. One of the prime national parks in Jaipur, the Sambhar Wildlife Sanctuary is also a prime supporter of the 'Project Tiger' conservation efforts. The Salt Lake was owned by various rulers of Jaipur and Jodhpur before it was leased to the British. Situated 65 kilometers from Jaipur, the lake is also a major hub for the production of salt. Bird lovers are also in for a treat here as Sambhar is the best place/town/sanctuary for bird watching. The main wildlife found at the Sambhar Wildlife Sanctuary includes flamingos, storks, sandpipers and redshanks.

History
The Sambhar Salt Lake is the largest inland salt lake in India and even finds mention in the mythological epic, 'Mahabharata'. History states that the lake was a part of the kingdom of a demon king known as 'Brishparva'. According to Hindu tradition, the goddess of the Chauhan Rajputs, 'Shakambari Devi', converted the town to a plain of precious metals. People, worried that this would induce feuds, prayed to the Goddess to retract the boon. So, the Goddess converted the town of metals into a town with a lot of salt. Thus, the Salt Lake is known to have had its beginnings from here, and there is a temple dedicated to Shakambari Devi, that is located near the lake. The Salt Lake was owned by Jaipur and Jodphur kings in turns and was later leased to the British. The Government of Rajasthan took over the lake post-Independence. The wildlife sanctuary however, does not have a distinct history of its own, and was declared a wildlife sanctuary in the early 20th century.

The Highlights Of The Place

Sambhar Lake
The Sambhar Lake is known for the production of brine/salt and also houses one of the largest salt manufacturing units in the country. Apart from this unit, tourists also flock the Sambhar lake to get a glimpse of the fames 'Shakambari Devi' temple and for bird-watching. Flamingoes, pelicans and the waterfowls are commonly sighted at the Sambhar Lake.

By Air
The Jaipur airport is 118 kilometers away from Sambhar and is located in Sanganer. The airport is well-connected to all major flight routes/destinations in India and to international destinations. From the airport itself, there are many modes of transport like private/public buses and taxis etc that can be taken to reach the Salt Lake and its other attractions.

By Rail
The Sambhar Salt Lake station is the nearest train station, which is also connected to Jaipur Railway Station. There are frequent trains that shuttle to Jaipur on an hourly basis.

By Road:
Sambhar is well connected by road with all nearby towns. The NH-8 connects Sambhar to Malhan, which is directly connected to Jaipur.

The Best Time To Visit
The best time to visit Sambhar Wildlife Sanctuary and the lake is from October to March. Avoid travelling to Sambhar from June to September, as this is the monsoon season and neither would you find much wildlife then, nor would you be able to witness much of salt production.

Sambhar is home to the largest saline lake in India and home to rare avian species. Located 60 kilometers to the west of Jaipur, Sambhar is a quaint, yet picturesque town and is also becoming a very popular tourist destination. For those wanting to savor a unique, outdoor experience, Sambhar gives you the opportunity to enjoy the vast expanse of the wildlife sanctuary and one can admire the famous view of the Salt Lake.