Planning India Tour ? Click Here
Jaipur
Ramgarh is famous for its artificial lake which attracts many tourists. Check out for more information on Ramgarh Lake in the following article.
Jaipur » Excursions » Ramgarh Lake 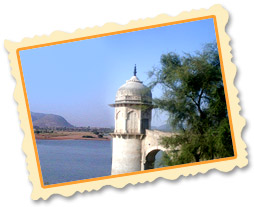 Known for its artificial lake, Ramgarh is situated at a distance of approximately 35 km from Jaipur city. The lake covers an area of 15.5 sq. km and had once been a major source of water for Jaipur city. Ramgarh Lake is a manmade water body created by forming an embankment on the forested hills. The place attracts hundreds and thousands of tourists every year. During monsoons, the lake is flooded with water and presents the most alluring scenic beauty for visitors. It is also an interesting place for bird watchers as they get to see flocks of birds including migratory birds around this artificial lake. Ever since Ramgarh was declared a Wildlife Sanctuary by the Government of India in 1982, the place also offers wildlife safaris for the tourists. There are also polo grounds, Jamwa Mata temple, Old Fort, museum and hunting lodge to see at Ramgarh. Amidst the ruins of ancient forts, Ramgarh Lake makes an ideal picnic spot for the visitors.

History
Ramgarh was once a hunting ground for the Maharajas of Jaipur. Over the years, the place has been turned into a heritage place. The heritage hotel at Ramgarh now stands majestically overlooking the Ramgarh Lake which is spread across an area of 15.5 sq. kms. Until year 2000, the lake had been a major source of water for the Pink City. Ramgarh Lake has a historical record of hosting a rowing event during 1982 Asian Games. The thick forest near Ramgarh Lake is home to many wildlife species such as Neelgai, Chital and lions. Hence, it has been pronounced a Wildlife Sanctuary since 1982, by the Government of India.

The Highlights Of The Place
The artificial Ramgarh Lake, spread across 4km, is the most popular tourist attraction in Ramgarh. The lake offers recreation like boating between the months of October and June.

The Polo ground at Ramgarh is regarded as one of the best Polo grounds in India. It is located between Ramgarh Lake and the Aravalli Hills. Jamwa Mata temple is another major attraction for the tourists in Ramgarh. The temple is situated at a downward course of Ramgarh Lake. It was built by Rao Dulherao of the Kachhwaha clan of Jaipur.

Ramgarh Lake, with its scenic beauty, is surrounded by exotic wildlife species, particularly birds, and is also a famous Polo ground. The Jamwa Mata temple and the hunting lodge, all combine to make it an attractive tourist destination in Jaipur. For locals, this lake is a favorite picnic spot. So, Ramgarh sure is a must visit place in Jaipur.